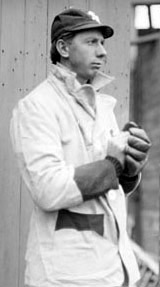 Art Fromme pitched 10 seasons in the big leagues, most notably winning 19 games in 1909 for a team which barely broke .500. Shortly after his major league career ended, he made news by stopping the record-setting 49-game hitting streak of Jack Ness in the Pacific Coast League. Fromme pitched from 1915 to 1921 in the PCL, mostly for Vernon, winning 20+ games for them three times.

Art was born in Quincy, IL, later the birthplace of Bruce Edwards, Rick Reuschel and Paul Reuschel. He was in the minors in Springfield (IL) in 1906.

"The Rejuvenation of Uncle Art Fromme . . . ART FROMME'S RESURRECTION. Out of the sepulchre of continuous defeat, with the grave clothes still dangling from his manly form, Art Fromme has come to haunt those who have declared vehemently: 'He's a dead one and O'Day doesn't know it. The victories of Fromme were the most encouraging events . . . There were fans in Redtown who were nursing such prejudice against Art Fromme that the mere announcement that he was to pitch acted as an incentive to stay away. . . Manager O'Day has put his faith in Fromme . . . Art Fromme has delivered good goods." - from Ren Mulford, Jr.'s column in Sporting Life, July 6, 1912