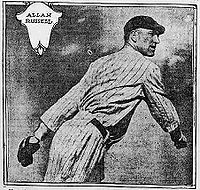 Allen "Rubberarm" Russell pitched 11 seasons in the big leagues. He was sometimes a starter, with 112 major league starts, and sometimes a closer, with 154 games finished. Although saves were not an official statistic at the time, he twice led the American League in the category.

Russell was born in Maryland in 1893, in the same month that Red Oldham was born in the state. The two would both go on to pitch in each major league, and they would appear in a World Series in the mid-1920s (Russell in 1924, Oldham in 1925).

Ruth came up to the Boston Red Sox for a number of years before going over to the New York Yankees. Russell did the opposite, spending 4 1/2 years with the Yanks from 1915 to 1919 before going over to the Red Sox for 3 1/2 years from 1919 to 1922. The two were together for half a season on the Red Sox in 1919. In his first season, 1915, he allowed 21 hits, walked 21 batters and struck out 21 batters. He is the only pitcher to ever have at least 20 hits, walks and strikeouts in a season with all being equal amounts.

Russell closed out his major league career with the Washington Senators, spending three years with them from 1923 to 1925 and appearing in the 1924 World Series, which the Senators won against the New York Giants. He pitched 3 innings in Game 3. The Senators returned to the World Series the following year, but he did not play in the series. While with the Senators, Russell was six years younger than teammate Walter Johnson.

After his major league days he spent a couple of years in the minors.

Russell was one of the pitchers who was allowed to keep using the spitball after it was largely outlawed in major league baseball. An article in the New York Times from July 22, 1917 called him the young spitballer, so clearly he was identified with the pitch. In 1922, he was the pitcher who faced Lizzie Murphy, playing first base for a team of American League All-Stars who faced the Red Sox in a special exhibition game at Fenway Park on August 14th. She grounded out to shortstop.

He was the brother of Lefty Russell