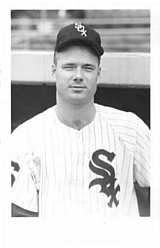 Alan Brice made three appearances with the 1961 Chicago White Sox. Despite a 0.00 career ERA, his one career decision was a loss on September 26, 1961, against the Boston Red Sox. He came on in the bottom of the 7th inning with two outs, Frank Malzone on first base and the Pale Hose trailing, 5-2. He gave up a triple to Lou Clinton, scoring Malzone. Brice then got Jim Pagliaroni to fly out and end the inning. He came back out in the bottom of the 8th with the score now tied, 5-5, and gave up a single to Don Gile and a walk to Pumpsie Green. He was lifted for Cal McLish, who allowed a triple to Gary Geiger, scoring Green. Both of Brice's runs were unearned, as Nellie Fox committed throwing errors in both innings.