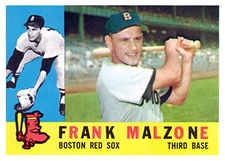 Third baseman Frank Malzone played a dozen years in the majors, primarily with the Boston Red Sox, and was a six-time All-Star and a three time Gold Glove winner.

A native of The Bronx, Malzone signed with the Red Sox out of high school, making his pro debut in 1948. He missed almost the entire 1950 season after injuring his ankle and then missed the 1952 and 1953 campaigns due to military service during the Korean War. After hitting .310 for the Louisville Colonels in 1955, he earned a September call-up to Boston. In his first starts, in a September 20th doubleheader against the Baltimore Orioles, he went 6-for-10, and he ended the year with a .350 average in 6 games.

Malzone was the Red Sox Opening Day third baseman in 1956 but hit just .165 in 27 games before being sent down to the minors in early June. Back with Boston in 1957, he hit .292 with 15 home runs and 103 RBIs in 153 games. He was named an All-Star and won a Gold Glove that year, and would have likely been the Rookie of the Year if he had not played just enough in the previous two seasons to lose his rookie eligibility.

Malzone won Gold Gloves in each of the next two seasons and was selected as an All-Star in five of the next seven years. A very durable player, he played in 475 consecutive games between 1957 and 1960, which is the longest such streak in Red Sox history since 1920. After splitting time at third with rookie Dalton Jones in 1965, he was released. He played one final season, with the California Angels in 1966, before calling it quits.

Malzone is the Red Sox franchise leader for home runs (131) and RBIs (716) by a third baseman.

In 2011, Malzone was a player development consultant for the Red Sox. He had earlier worked for the team as a scout and spring training instructor.

Malzone lived in Needham, Massachusetts, until his death in 2015 at the age of 85. He was the father of John Malzone.