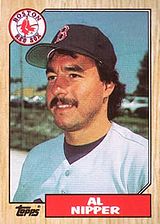 Al Nipper was signed as a 8th round pick in the 1980 amateur draft by the Boston Red Sox and scout Don Lenhardt.

At the end of his career, Nipper spent the 1990 season in the Cleveland Indians organization attempting to become a knuckleball pitcher.