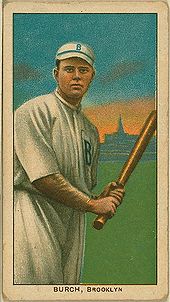 Al Burch played six years in the major leagues, mostly for the Brooklyn Superbas. In his finest year, 1909, he hit .271 in 152 games on a team that hit .229. He also led the team with 38 stolen bases. Burch was involved in a strange double play while playing with the St. Louis Cardinals in 1906. He hit a line drive that banged off pitcher Jack Cameron's head and came back on the fly to catcher Jack O'Neill, who threw to first base to catch the runner off first base for a double play. After his baseball days, he was a chauffeur.