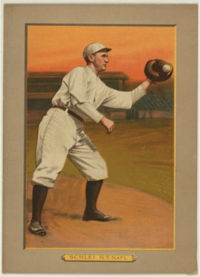 Catcher Admiral Schlei played eight seasons in the National League. For five of the eight years, he was the # 1 catcher on his team.

When he was traded to the New York Giants, he sent a letter to John McGraw telling him how pleased he was to be coming to the Giants.

One source believes that he was nicknamed "Admiral" after Admiral Schley, a hero of the Spanish-American War. Whatever the case, newspapers during his major league career seemed to refer to him as often by "Admiral Schlei" as by his given first name.

After major league baseball, he played in the American Association and the Southern Association.