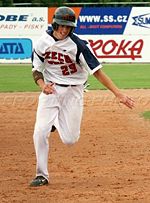 Šimon Kudernatsch has had a busy 2008, playing college baseball in the USA, going to Germany to help the Regensburg Legionäre and appearing with the Czech national team.

Kudernatsch opened 2008 as a freshman at the University of Hartford. He hit .288/.373/.374 as their starting shortstop and fielded .947. He then returned to Regensburg, where he played for the Legionäre in the 2008 European Cup they hosted. He was their top hitter in the event, batting .478/.500/.739 in 5 games and scoring 9 runs. He was 5th in average, second to Ramon Tavarez in hits (11), led in runs, tied Philipp Howard for the most triples (2) and tied Tavarez and Giuseppe Mazzanti for the most total bases (17). He had 5 hits in a win over MGPU SYOS 42 and scored the winning run against the Templiers de Sénart.