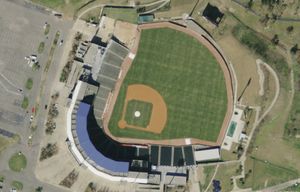 The Shrine on Airline in Metairie, LA, was the home of New Orleans affiliated baseball from 1997 through 2019. After that, and the Coronavirus pandemic-canceled 2020 season, the New Orleans Baby Cakes of the Pacific Coast League moved into a new ballpark in Wichita, KS, as the Wichita Wind Surge.

It is unusual for an HOK Sport (now Populous) ballpark in that it is not located downtown. It opened as Zephyr Field in 1997 for the then-New Orleans Zephyrs. It later staged relief efforts for Hurricane Katrina.

Second-year owner Lou Schwechheimer dumped the name "Zephyrs" after the 2016 season and also rebranded the stadium with its address-based nickname. It appears in the films Mr. 3000 (2004) and Failure to Launch (2006). The second season of TV's Brockmire (2017-20) was set there, although shot elsewhere, so the Cakes played twice in their last season as Brockmire's punctuation-challenged Crawdaddy's.