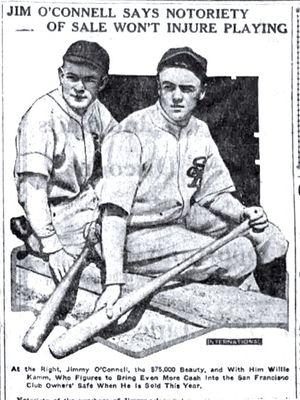 Willie Kamm was a good-fielding third baseman with moderate hitting ability who played third base at a time when there were not many top players at the position. He is not well-remembered, perhaps because his teams never won a pennant.

Kamm made his pro debut in 1918 with the Sacramento Senators, playing in just 4 games before being released and returning to semi-pro ball. He was signed by the San Francisco Seals in 1919 and played with them for four seasons. His career with the Seals started off slowly, as he hit .235 and .237 in his first two years with the club. By 1921, his batting average was up to .288 and he led Pacific Coast League third basemen in fielding. His contract was purchased by the Chicago White Sox in May 1922 for $100,000 (the first player ever sold for that high an amount), but he remained with the Seals for the rest of that season, hitting .342 with 56 doubles and 35 stolen bases.

Kamm became the regular third baseman for the White Sox in 1923 and spent a total of thirteen seasons in the majors with the Sox and Cleveland Indians. Kamm led the American League with 90 walks in 1925 and had his best year at the plate in 1928 when he hit .308 and was fifth in MVP voting. He led AL third basemen in fielding eight times in his big league career.

After his playing days, Kamm returned to the PCL to manage the Mission Reds in 1936. They finished fourth in 1936 and last under Kamm in 1937. He retired from baseball when the Missions moved south and became the Hollywood Stars after the 1937 season.