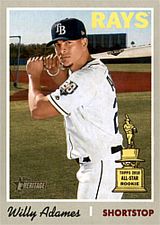 Shortstop Willy Adames is a veteran of two seasons with the Tampa Bay Rays.

Adames was signed by the Detroit Tigers at the age of 17 in 2013 and spent his first professional season at home in the Dominican Republic, hitting .245/.419/.370 for the DSL Tigers. He was very raw, but his ability to draw 56 walks in 60 games showed some pretty impressive plate discipline. The Tigers promoted him aggressively, having him start the 2014 season with the West Michigan Whitecaps of the Midwest League. The move paid off as he managed to more than hold his own, hitting .269/.346/.428 in 98 games. He was drawing fewer walks, but hitting for power, with 14 doubles, 12 triples and 6 homers, while being more than three years younger than the average player in the circuit. That performance opened a lot of eyes, and when the Tampa Bay Rays were forced to trade ace pitcher David Price at the trading deadline or risk losing him after the 2015 season for only a draft choice, they insisted on obtaining young Willy from the Tigers. He was packaged with starting pitcher Drew Smyly and infielder Nick Franklin, but was clearly the player with the highest potential ceiling among the three. Finishing the year with the Bowling Green Hot Rods, he hit .278 in 27 games to finish with a combined line of .271/.353/.429 in 125 games.

In his first full season in the Rays organization in 2015, he hit .258/.342/.379 for the Charlotte Stone Crabs of the Florida State League. He played for the World Team in the 2016 Futures Game, while spending the year in AA with the Montgomery Biscuits of the Southern League. He hit .274/.372/.430 in 132 games, with 31 doubles, 6 triples and 11 homers, scoring 89 runs. He continued his progression in 2017, moving up to AAA with the Durham Bulls of the International League. There, he hit .277/.360/.415 in 130 games, with 30 doubles and 10 homers. He could have been given a look at the major league level immediately, but the Rays decided to push back his debut in order to delay his eligibility for arbitration, and he was back with Durham to start 2018, even though he had little left to prove in the minors. After 40 games, he was hitting .311 with 4 homers and 25 RBI when he received the call to the Show.

Willy made his debut for the Rays on May 22nd, starting at shortstop and batting fifth in a game against the Boston Red Sox. He went 1 for 4 with 3 strikeouts, the hit being a solo homer off Chris Sale in the 4th inning. He quickly gave signs that he was ready to be an everyday player at the major league level, even if he still had things to learn and gradually took away playing time from incumbent Adeiny Hechavarria, whose bat was nowhere near as good as Willy's. The changeover was completed on August 1st when Hechavarria was designated for assignment in the wake of outfielder Tommy Pham's acquisition at the trading deadline: it clearly meant that the Rays were now placing their full trust in the young infielder. Overall, he batted .278/.348/.406 in 85 games. In his first full season, 2019, Adames slashed .254/.317/.418 with 20 home runs, 69 runs scored and a 4.2 bWAR on the strength of some stellar defensive work. His 13 defensive runs saved paced all American League shortstops. he made his postseason debut that year and was very good in Tampa Bay's loss to the Houston Astros in the Division Series, going 5 for 13 with a double and two homers. In 2020, he hit .259 in 54 games in the pandemic-shortened season, with 8 homers and 23 RBIs. He posted the best OPS+ of his young career at 127 as the Rays had the best record in the American League. This time, he played four postseason rounds, but his batting average was below .200 in each of them, and his only extra-base hits were a pair of doubles in both the ALCS and the World Series. Against the Los Angeles Dodgers in the Fall Classic, he was just 3 for 21, with no runs, 1 RBI and 8 strikeouts as he seemed to have lost all of his hitting talent.

There was a lot of talk heading into the 2021 season about when the Rays would replace Adames, considered a budding star only two years earlier, with the team's latest phenom, Class-A SS Wander Franco, who was ranked as the top prospect in the game by many sources. In spite of the discussions, Adames retained his job in spring training, but his hitting woes continued as after 40 games, he was hitting below .200, although with occasional power, as he had 6 doubles and 5 homers. Still, it was a surprise that on May 21st, he was traded to the Milwaukee Brewers alongside P Trevor Richards, in return for a pair of relievers, J.P. Feyereisen and Drew Rasmussen. The Brewers' shortstop, Luis Urias, had been going through defensive issues of late, and it seemed clear that the Brewers wanted an upgrade with the defensively reliable Adames. It turned out that he wasn't only good with the glove, but with the bat as well as he turned into the Brewers' top hitter after the trade, making a case as a contender for the MVP Award, with his outstanding two-way contributions to the best team in the NL Central.