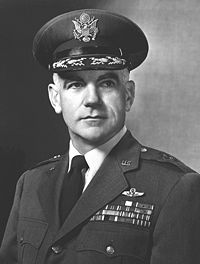 The little known fourth Commissioner of Baseball, William Eckert is probably the least known of the men who held the office. When Ford Frick announced his retirement, the short list included Joe Cronin, Lee MacPhail, and Gabe Paul but the owners selected General Eckert instead.

Eckert was a West Point graduate who later attended Harvard Business School. At the time of his election, he was the ultimate outsider, having not seen a game in person for ten years. In fact one of the oft-repeated quip about him is that someone is supposed to have said, upon hearing of his election "My God, they've just elected the unknown soldier !"

Among Eckert's moves in office were voiding Tom Seaver's signing with the Atlanta Braves and overseeing the expansion of 1969. He was asked to resign in 1969, when the owners lost confidence in his leadership. He did so and died two years later while playing tennis in the Bahamas.