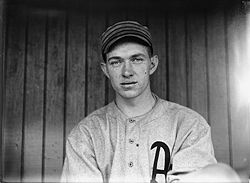 "McAvoy probably is the most logical to be called the hero of the series, for it was his bat that won two games, started a rally that won another, and in the second game kept the Orioles from being shut out." - The Sporting News, about the 1922 Junior World Series where McAvoy played for Baltimore

Catcher Wickey McAvoy played six seasons for the Philadelphia Athletics, whose manager, Connie Mack, was a former catcher himself. The A's were excellent in 1913 and 1914, but then the team was disassembled and became sub-.500.

McAvoy also spent at least a decade playing in the International League.