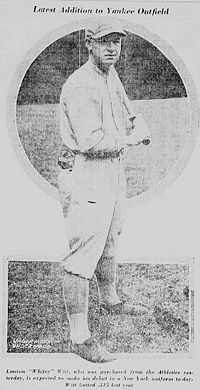 Whitey played both outfield and infield (mostly shortstop). In 1916 and 1917, he was primarily a (very error-prone) shortstop for the Philadelphia Athletics. He missed the 1918 season because of World War I, then was half an outfielder and half a second baseman in 1919, and from then on he was mostly an outfielder.

He was the leadoff man for the Yankees in both the 1922 and 1923 World Series. He led the league in walks in 1922, getting 5 more than his teammate Babe Ruth, who was suspended for part of the season. In a crucial game played on September 16th on the road against the St. Louis Browns, he was hit on the forehead by an empty pop bottle thrown by a fan while trying to catch a ball in centerfield. He was knocked unconscious and the incident almost caused a riot, but he came back to hit the game-winning single in the 9th inning that virtually clinched the pennant for the Yankees two days later.

He is the most successful major league player to come out of Bowdoin College.