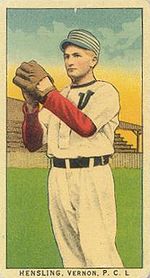 Whitey Hensling played in the minor leagues from 1909 to 1920, missing some years in-between.