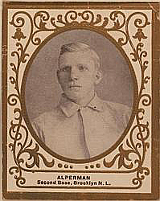 Whitey Alpermann, who was the regular second baseman for the Brooklyn Superbas for three of his four years in the majors, is mildly famous for a couple of things. First, his intense dislike of getting a walk, and second, his tendency to get hit by a pitch. In his career of 1,632 at-bats, he was hit by 39 pitches while he walked only 30 times. He batted 442 times in 1909 with only 2 walks, the lowest single-season walk rate of the twentieth century in 300 or more plate appearances.

His last name is usually spelled "Alperman" in encyclopedias, although he used the spelling "Alpermann" on various documents signed by his own hand.