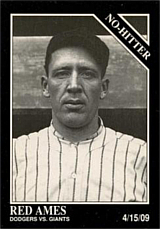 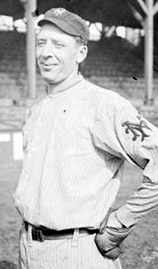 "Ames is without question almost the hardest pitcher to catch of the professionals. Players say no man who holds a place in the pitcher's box is able to curve the ball so far as he can. It is a fact that he doesn't always know himself where his curves are going to land." - The Sporting Life, 1906

Pitcher Red Ames made his big league debut as a 21-year-old with the New York Giants in 1903. In his first start, September 14th, he threw a five inning no-hitter against the St. Louis Cardinals, and in his only other appearance pitched a five-hit complete game. Ames was a regular in the Giants rotation by 1905 and went 22-8 with a 2.74 ERA, 21 complete games, and 198 strikeouts that year. He also threw 30 wild pitches, the modern record for a single season. On April 15, 1909 (Opening Day), Ames held the Philadelphia Phillies hitless through 9 innings, only to lose the game in 13. This was typical of the bad luck he faced during his career, which earned him the nickname "Kalamity".

Overall, Ames played 17 years in the majors, ending his career with a 2.63 ERA. He also recorded 156 wild pitches in the majors. After his big league days, he played for the Kansas City Blues from 1920 to 1922 and managed the Daytona Beach Islanders for part of the 1923 season. His son, Leon Ames Jr., pitched in the minor leagues.

Ames was inducted into Trumbull (OH) County Sports Hall of Fame on October 16, 2005.