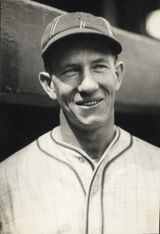 Watty Clark pitched parts of twelve big league seasons, doing much of his heavy lifting for the Brooklyn Robins. In 1929, he led the National League with 39 starts and 279 inning pitched and was rewarded with a 16-19 record, good for most losses, despite a 3.74 ERA in an offensive explosion. The next season, "The Year of the Hitter", 1930, he pitched a one-hit shutout on July 15th against the Pittsburgh Pirates at Ebbets Field, permitting only a single to Hall of Fame third baseman Pie Traynor in the 2nd inning. It proved the only NL one-hitter in 1930, with the only other one-hitter tossed by Lefty Grove for the Philadelphia Athletics on July 1st. Watty won 20 games in 1932, then fell off his prodigious innings accrual, eclipsing 200 innings just once more before his final appearance in 1937.