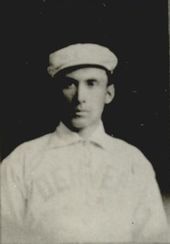 Walt Preston was the most-utilized backup player on the 1895 Louisville Colonels team, appearing in 50 games, primarily at third base and in center field. Walt's batting average was .279, exactly the same as the team's average. He was five years older than teammate Fred Clarke.

Walt had a long minor league career, at least 16 seasons long. He moved around a lot, playing for around 15 different teams. His last team was the 1908 New Orleans Pelicans, and he eventually died nearly 30 years later in New Orleans, LA.

"Louisville took a batting streak and scored 13 runs in three innings on 16 hits. Preston's batting and fielding and the fielding of Shugart and Stratton were the features." - Sporting Life's commentary on the game of April 24, 1895