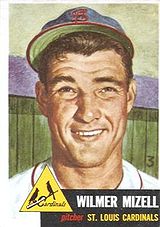 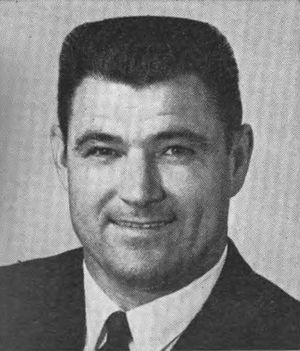 Vinegar Bend Mizell was a major league pitcher in the 1950s and 1960s and later a successful politician elected to Congress.

He started in the majors with the St. Louis Cardinals in 1952, where local writers gave him his colorful nickname, "Vinegar Bend" (derived from his hometown's name, Vinegar Bend, Alabama), which stuck with him for the rest of his life. A hard thrower, he mounted high strikeout numbers with his moving fastball.

He set the Cuban Winter League record for strikeouts, with 206 in 179 innings in 1955-56. In 1956, he was chosen as the Cardinals' Opening Day pitcher on the strength of that performance; that makes him the last pitcher in Major League history to start on opening day after having missed the previous two seasons.

Mizell played in the 1960 World Series for the Pittsburgh Pirates, but was one of the Pirate pitchers who were incapable of retiring the New York Yankees' powerful hitters. He was charged with the loss in Game 3 of the Series, on October 8th, when he retired a single batter as the Pirates' starter before being lifted for Clem Labine, letting the Yankees build a 6-0 1st-inning lead on their way to a 10-0 drubbing. He also pitched two scoreless innings in relief in Game 6, on October 12th, with his team already down 6-0 in a game they would lose 12-0. Yet, he would win a World Series ring as the Pirates managed to win that bizarre World Series, 4 games to 3, thanks to Bill Mazeroski's dramatic 9th-inning home run in the decisive game.

He finished his baseball career as a member of Casey Stengel's legendary "Amazin' Mets" of 1962. In the minors with Columbus in 1962 he went 2-1.

After his retirement from baseball, he worked in sales and marketing for the Pepsi-Cola Corporation, then was elected commissioner of Davidson County, North Carolina, later serving as chairman of the county board of commissioners. He was elected to Congress in 1968 and served as a Republican Representative from the state of North Carolina from 1969 to 1975.

He failed to be re-elected in 1974, when the Democrats swept the congressional elections in the wake of the Watergate scandal. He was appointed as Assistant Secretary of Commerce for Economic Development, a post he held from 1975 to 1976, until he ran again unsuccessfully for election. He occupied other senior government positions in the Ronald Reagan and George H. W. Bush administrations.