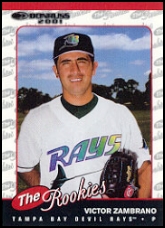 Victor Zambrano was one of the most successful pitchers in the early days of the Tampa Bay Devil Rays. He went 6-2 in 2001, then won 8, 12 and 9 games for wretched teams over the next three seasons. At the trading deadline in 2004 he was involved in an ill-fated trade to the New York Mets that Mets fan rued for years. In order to obtain an experienced hurler for a pennant drive that never materialized, the Mets gave up their top pitching prospect, Scott Kazmir, who quickly established himself as the Devil Rays' new ace. For his part, Zambrano only made three starts for the Mets in 2004 (winning 2) before hurting his arm. He was a pedestrian 7-12, 4.17 in 2005, then got hurt again early in 2006, after going 1-2, 6.75.

He resurfaced with the Toronto Blue Jays in 2007, but was obviously not right, as he was winless in 8 games with an ERA over 10.00. After earning his unconditional release, he was signed by the Baltimore Orioles but did no better and missed the entire 2008 season.

Zambrano was named to the Venezuelan national team for the 2009 World Baseball Classic, which was an opportunity for him to push his way back into the major leagues. In his first outing in relief of Armando Galarraga against Team USA, he pitched a scoreless inning before falling apart and being charged with the loss. His next outing was a start against the same Team USA in the first round seeding game, where he looked much sharper, keeping the mighty American bats off the scoreboard for three innings before being tagged for a run in the 4th. However, he failed to impress enough to make his way back to the big leagues.