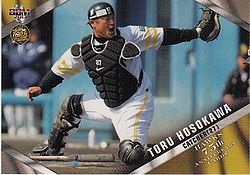 Toru Hosokawa has been the starting catcher for the Seibu Lions for several years.

Hosokawa got his nickname, Kiyoshi, due to his resemblance to a singer named Kiyoshi Hikawa. Hosokawa uses one of Hikawa's songs as his intro when he comes to the plate. He was a second-round draft pick in 2002, taken by the Seibu Lions. He was 0 for 4 as a rookie. In 2003, Toru split catching duties with long-time starter Tsutomu Ito; he hit .200/.243/.349 with 64 strikeouts in 195 AB. His first hit was on April 2 against Masato Yoshii and his first homer was 19 days later against Dae-sung Koo.