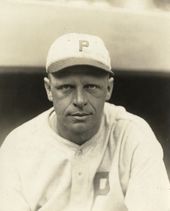 Walter "Toots" Shultz had a high-profile baseball career. He was highly sought-after by pro teams when he was in high school and at the University of Pennsylvania, and signed a rich contract to play for the Philadelphia Phillies. He had wanted to get a college degree, but flunked out of college and that's what freed him to sign a pro contract. He wasn't successful with the Phillies, although he had some success in the minors and in exhibition games in 1911-12.

He found a home with the Providence Grays, pitching for them in 1914-17. He won 19 games in 1914 and 18 in 1915. He was a teammate of Babe Ruth in 1914 in Providence, and he also became famous for supporting the Germans when WWI broke out in 1914 (the USA would not enter the war for several years yet). When the USA did enter the war, he joined the US Navy, and pitched service ball. After the war, he continued to pitch in the minors and in an outlaw league, and also played some outfield.

The only other player remembered with the first name "Toots" is Toots Coyne, who came to the majors a few years after Shultz did.