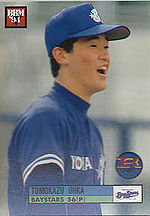 Pitcher Tomo Ohka played for the Yokohama BayStars of Japan's Central League from 1994 to 1998, when he was purchased by the Boston Red Sox. He was undefeated in 24 starts in the minors in 1999, going 8-0 with a 3.00 ERA for the Trenton Thunder and 7-0 with a 1.58 ERA with the Pawtucket Red Sox. He also had three stints in the majors that year with the Red Sox, going 1-2 and posting a 6.23 ERA. He began 2000 by going 0-4 with Pawtucket but won 9 of his next 11 decisions to end the year with a 9-6 record and a 2.96 ERA with the PawSox. He also threw a perfect game, only the third in the history of the International League, against the Charlotte Knights on June 1st. He was recalled to Boston late in the season, going 3-6 with a 3.12 ERA.

Ohka began 2001 as a member of the Red Sox rotation before being sent back down to Pawtucket. He eventually returned to the majors, going 2-5 with a 6.19 ERA in 12 games for Boston before being sent to the Montreal Expos for Ugueth Urbina at the trading deadline. In 10 starts for the Expos, he was 1-4 with a 4.77 ERA. He was a member of the Montreal rotation in 2002, leading the club with 13 wins and a 3.18 ERA despite missing the last six games of the season due to a suspension for hitting Andruw Jones. The next year, 2003, he made 34 starts for the Expos, going 10-12 with a 4.16 ERA.

Ohka started 2004 by going 0-5 with a 5.13 ERA in April but was 3-0 with a 1.79 ERA in his next 7 starts before suffering a broken hand on a batted ball in June and missing most of the remainder of the season. The Expos became the Washington Nationals in 2005, and he went 4-3 with a 3.33 ERA in 10 games with the club before being traded to the Milwaukee Brewers for Junior Spivey in June. He threw the first complete game shutout of his big league career in his first game for the Brewers on June 14th against the Tampa Bay Devil Rays and was 7-6 with a 4.35 ERA overall for the team. However, he missed two and a half months of the 2006 campaign, winning just 4 games in 18 starts.

On December 17, 2013, Ohka signed a minor league contract with the Toronto Blue Jays. By then, he had reinvented himself as a knuckleballer, and while he stood little chance of making the team's pitching staff, the Blue Jays wanted to have some other knuckleball pitchers around in spring training to give some of their catchers practice with handling the tricky pitch, what with team ace R.A. Dickey relying on the floater as his bread-and-butter weapon.