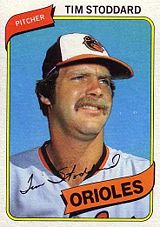 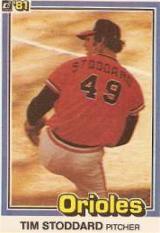 Pitcher Tim Stoddard is the only man to ever play on an NCAA basketball champion and a World Series champion.

Stoddard attended college at NC State, where he was a starter on the basketball squad that won the 1974 NCAA basketball championships. He was drafted by the Chicago White Sox in 1975 and made one appearance in the majors with them in September of that year. After being released by the Sox in spring training of 1977, he signed with the Baltimore Orioles, and he was back in the majors with the O's in 1978.

With the O's, Stoddard played in the 1979 World Series and was the winning pitcher in Game 4, in which he had an RBI single in the Orioles' 6-run 8th inning (in his first major league at bat). He was the team's closer in 1980, finishing fourth in the American League with 26 saves. He remained a part of the club's bullpen for the next three seasons, and was a member of the 1983 World Series champs (but did not play in the postseason that year).

Stoddard was traded to Oakland Athletics after the 1983 campaign and then subsequently sent to the Chicago Cubs, who won the National League East title in 1984. He signed with the San Diego Padres in 1985. One of his two career regular season base hits was a home run. He hit it off Mike LaCoss on June 18, 1986, while pitching for the Padres against the San Francisco Giants.

Stoddard later pitched for the New York Yankees and Cleveland Indians. Working entirely in relief, Stoddard compiled a 41-35 career record with a 3.95 ERA, 582 strikeouts and 76 saves in 485 games.

In 1989 and 1990, Stoddard played for the West Palm Beach Tropics of the Senior Professional Baseball Association. He went 10-2 with a 4.10 ERA for the club.

Stoddard was pitching coach for Northwestern University from 1993 to 2014. He became pitching coach at North Central College in 2016. He was inducted into the Indiana Baseball Hall of Fame in 2006.