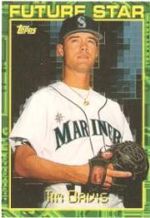 Pitcher Tim Davis was originally drafted by the Minnesota Twins in the 34th round of the 1991 Amateur Draft, but didn't sign. The next year, he was chosen in the sixth round of the 1992 Amateur Draft by the Seattle Mariners. He subsequently pitched in parts of four seasons in the big leagues (1994-1997), all with the M's. He appeared in 89 games (6 starts), compiling a 6-5 record with a 4.62 ERA.

Davis' career was cut short because of Tommy John surgery, though he made a comeback attempt in 2001, pitching for the AA Huntsville Stars in the Milwaukee Brewers system.

After his playing days had ceased, Davis settled near Bristol, FL where he worked as a recreational director at a correctional facility. He has also coached middle school girls' basketball and boys' baseball.