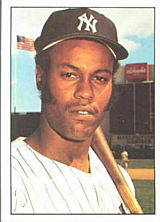 Terry Whitfield, who played ten seasons in the big leagues, may have been the first major league player to go to Japan during the prime of his major league career. He had hit .296 at age 27 before going to play three seasons in Japan.

In early March 1981 the Giants sold him to the Seibu Lions and he played three seasons in Japan, helping the team to a couple of championships. Then, saying he wanted to be closer to his family, he came back to the States as a member of the Los Angeles Dodgers in 1984. He was a backup on the 1984-1986 Dodger teams, appearing in the 1985 NLCS. Released in late May 1986, he played 1987 and 1988 in the California League.

Terry later owned the Future Pro Baseball Center in the San Francisco, CA area and is the inventor of the soft toss machine The Terry-Toss.