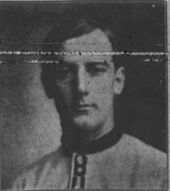 Swat McCabe had a good 1909 season. He played for the New Britain Perfectos during much of the year, hitting .366, and he came up to the majors in September to play three games with the Cincinnati Reds and hit .545.

He is the only major leaguer remembered with the first name "Swat", although some players such as Babe Ruth had alternate nicknames such as the "Sultan of Swat".

In 1949 a little league in Bristol, CT was formed and given the name McCabe-Waters Little League, named after Swat McCabe and another local star named Clyde Waters. The league still exists.

Sporting Life never called him Swat. He was either Arthur McCabe or "Pinch" MaCabe.