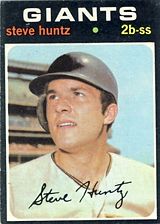 Steve Huntz hit 2 home runs in one game twice. The first time came on September 26, 1969, when as a member of the St. Louis Cardinals he connected against Don Shaw and Larry Jaster of the Montreal Expos in a 12-1 win. On August 17, 1971 as a member of the Chicago White Sox against the Detroit Tigers, he hit both homers against Mickey Lolich. The second one put the White Sox ahead and they won the game, 6-5. The two home runs proved to be the only ones Huntz hit all season, and his last two as a major leaguer.

He was a quasi-regular with the San Diego Padres in 1970, when he played 106 games, 57 at shortstop and 51 at third base. He hit .219 with 11 homers and 37 RBI that year. Surprisingly, that batting average was the highest of his five-year career.