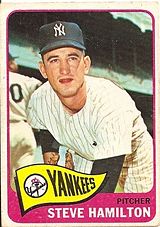 Prior to reaching the major leagues, pitcher Steve Hamilton played alongside Elgin Baylor for the Minneapolis Lakers of the NBA.

His one complete game shutout was on August 5, 1966, against the Cleveland Indians, while pitching for the New York Yankees. He gave up 5 hits, walked 1 and struck out 3. It was one of only 3 starts he had in the 1966 season. Late in his career Hamilton threw the famed "folly-floater," a high, slow lob pitch (see below). Other pitchers that have thrown a lob pitch include Rip Sewell and Dave LaRoche.

After his major league career ended, he was a Detroit Tigers coach in 1975 and head coach at his alma mater, Morehead State University from 1976 to 1989. He also served as athletic director at MSU. Hamilton died of cancer at age 63.