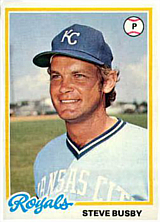 Steve Busby was a 20 game winner who threw a pair of no-hitters during an eight year big league career with the Kansas City Royals.

Despite struggling with injuries during his high school career, Busby was selected by the San Francisco Giants in the fourth round of the 1967 amateur draft. After a knee injury, the Giants reduced their contract offer, and he elected to attend USC. While in school, he suffered an arm injury but recovered to lead the team to the 1971 College World Series title. He also took a creative writing course there taught by Rod Serling, the creator of The Twilight Zone.

After being drafted by the Royals in 1971, Busby made it to the majors late in the 1972 season, throwing three complete games and posting a 1.58 ERA in five starts. In 1973, he threw a no-hitter against the Detroit Tigers on April 27th and finished the year with 16 wins, tying for third in American League Rookie of the Year voting. In 1974, he was even better, winning 22 games, making the All-Star team, and hurling another no-no on June 19th against the Milwaukee Brewers. In his next start after the no-hitter, he went 5 1/3 innings before giving up a hit (retiring 33 straight batters over the two games). In 1975, Busby won 18 games and again was an All-Star. He was soon slowed by shoulder and knee injuries, causing him to miss the entire 1977 campaign. He retired as a player following the 1980 season. Along with Amos Otis, he was an inaugural inductee of the Kansas City Royals in 1986.

Bill James created a formula to calculate how likely a pitcher is to pitch a no-hitter. Based on that formula, Busby was the least likely pitcher in major league history (of pitchers who actually pitched two no-hitters) to pitch the two no-hitters that he did. See Expected No-Hitters.

After his playing days, Busby was a television broadcaster for the Texas Rangers from 1982 to 1995, doing radio games for the club on PBP and color as late as 2017. In 1989, he played for the Orlando Juice of the Senior Professional Baseball Association. Steve was the fourth cousin of outfielder Jim Busby.