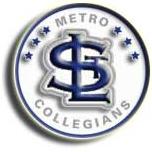 The St. Louis Metro Collegiate Baseball League is one of only a few Summer Collegiate Baseball Leagues operating out of a single city. While the SLMCBL attracts collegiate athletes from across the nation who are interested in developing their skills to enter the MLB Amateur Draft, all St. Louis Metro League games are held within the St. Louis, MO metropolitan area. Like other Summer Collegiate Baseball Leagues, all SLMCBL players are NCAA eligible and are unpaid in order to maintain their eligibility and live with host families in a similar manner to Single A and Independent League players. Likewise, each Metro League team is operated in a similar manner to a professional minor league team: recruiting, providing players an opportunity to play under the same conditions using wooden bats, minor league specification equipment, experiencing overnight road trips and playing nightly before fans in a stadium. What sets the St. Louis Metro Collegiate Baseball League apart is that the league not only makes an effort to stay intimately connected to the traditions of baseball in St. Louis, Ozzie Smith is active on the league board; and not only does the league work to improve the skills and training of their athletes, they hold the unique distinction that over 90% of their athletes attend college on academic scholarships.