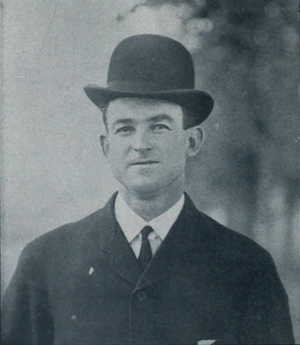 At the University of Michigan in 1906

Sport McAllister played in the minors from 1892-1915, and also was in the majors for seven seasons, playing every position on the diamond.

McAllister, who played numerous games at most positions, had the fewest games at second base, where he only appeared seven times in the majors. He had 123 games in right field, 85 at catcher, 65 at first base and 62 at shortstop, among his most-commonly played positions.

He was not a great hitter, although in his best season he hit over .300 in the first year of the Detroit Tigers, in 1901.

He was a regular on the unfortunate Cleveland Spiders of 1899, perhaps the worst National League team of all time, and was one of the worst-hitting regulars on the team.

He managed at least twice in the minors, and also coached for the University of Michigan from 1905 to 1909, missing the 1907 season; he was still active as a player with the Buffalo Bisons during those years. He umpired three major league games, one in the National League in 1899 and two in the American League in 1901 and 1902.