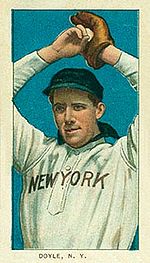 "He wants eight to ten days between the games in which he works. He is a slow chap, anyhow. He claims that his arm needs rest. He is one of the greatest pitchers there is." - Jack Chesbro in Baseball Magazine (February, 1910)

His career got off to a good start as he threw shutouts in each of his first two starts. He was the first 20th century pitcher to accomplish that feat ([2]), and it had been accomplished only twice before he did it. Since he did it, it has been accomplished 11 times ([3]). However, perhaps more impressive is those two starts were also his first two big league appearances. Only three American League pitchers have thrown shutouts in their first two big league appearances since Doyle did it ([4]).

Statistically, he is most similar to pitcher Alex Main, according to the Similarity Scores (through July, 2008).

After his death, Doyle was buried in Evergreen Cemetery in Tannersville, New York.

Doyle became a celebrity among baseball card collectors in the 1990s because one of his cards, produced by the American Tobacco Company in 1910, contained an error. On it, he is listed as pitching for "New York Nat'l" when he was in fact with the American League New York Highlanders; the company quickly caught the error and a new version of the card, without the league listed, was issued (see the picture used to illustrate this article). As a result, the error version is extremely rare and has sold for over $400,000.

Doyle got his nickname Slow Joe because he was a very slow working pitcher - he would take a lot of time between pitches, often stalling for notable amounts of time ([5]).