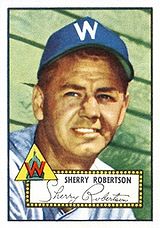 Sherry Robertson was the nephew and adopted son of Clark Griffith. He was the step-brother of former Twins owner Calvin Griffith. He was also brother-in-law of Hall of Famer Joe Cronin and of Joe Haynes.

Robertson was at the University of Maryland right after Charlie Keller was there.

He played in the minors from 1939 to 1942 and was in the majors for ten seasons, almost all with the Washington Senators. Primarily a back-up at the major league level, he had 300+ at-bats only once, in 1949.

In spite of a low batting average, Robertson was useful because he could play outfield and infield, drew walks well, had a bit of power, and could steal bases.

Robertson served as farm director of the Washington Senators from 1958 to 1960 and continued in the role when they moved and became the Minnesota Twins in 1961, until his death in 1970. He was killed in a car crash while on a hunting trip in South Dakota.