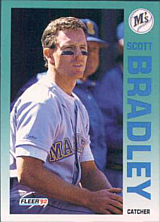 Scott Bradley hit two home runs on August 10, 1987 as a member of the Seattle Mariners against the Oakland A's. The pitcher was Dave Stewart. In 1989, he batted .345 with runners in scoring position (fourth highest in the league) - after mid-June, that average was .397. He collected the last hit in old Comiskey Park in 1990. In parts of nine big league seasons, with the large majority of his time coming between 1987 and 1990, Scott batted .257 with 184 RBI.

In international play, Scott caught for Team USA in the 1980 Amateur World Series; they finished fourth. In the minors, Scott earned Most Valuable Player honors with the Columbus Clippers of the International League, batting .335/.371/.433 in 138 games behind the plate. This earned him his first call up to the bigs with the New York Yankees.

His older brother, Bob, was head coach of U.S. Men's National Soccer Team, including at the 2010 FIFA World Cup in South Africa, and spent 12 years as head coach of the men's soccer team at Princeton. His nephew, Michael, is a star soccer player who played in the World Cup for Team USA. His son, Scotty, played at Indiana and was a 36th round draft pick in 2019.

Scott has been head baseball coach at Princeton since 1998, amassing a 410-518-2 record and six trips to the men's baseball tournament. He was an assistant coach with Rutgers in 1997.