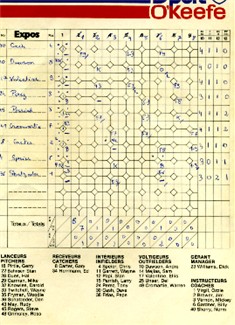 A completed scorecard from a game between the Montreal Expos and New York Mets on August 8, 1978

Scoring a game is the act of following a baseball game hitter by hitter, pitch by pitch, with the outcome of each hitter reflected by line markings on paper.

Score is kept on a special sheet of paper called a scorecard or scoresheet, marked with a grid, with columns delinating the inning and rows corresponding to slots in the batting order. It can be either pre-printed or home made. Each position is denoted by a number. They are as follows:

Furthermore, each play has a code, which varies from one scorer to another. A fly ball out can be marked with a circle and the fielder's number inside the circle, or by the letter "F" followed by the fielder's number; in this system, a line-out can be scored "L" followed by the number, and a foul ball caught on the fly can be designated by a lower-case "f" or "l" followed by the number. A ground ball out is delineated by a hyphen, such as a ground ball out from shortstop to first base is 6-3 and read as "six to three". Double plays are written as "DP 6-4-3", such that the shortstop threw to the second baseman who threw it to the first baseman to complete the play. If the out is the result of a sacrifice, the notation "Sac" is usually added before the out (i.e. "Sac 2-3", or "Sac F9"). A player reaching on an error would be marked "E" followed by the position number of the player who committed the error, next to the base which he reached.

Walks are denoted by a "BB".

A batting player receives an RBI (run batted in) when the result of his at bat scores a runner on any of the bases. However, there are exceptions to this rule, including when the batter reaches base on an error. An RBI can be marked by a star or an asterisk next to the result of the at bat (for example 4-3* would be a ground out, second base to first base, which drives in a run).

An earned run is attributed to the pitcher when a batter that pitcher faced scores without an error or passed ball occuring, or if the run would have scored even if there had been no error.

The numbering of positions as we know them was only fixed in the first years of the 20th Century. Before that time, there were competing numbering systems, some of which would assign number 5 to the shortstop and number 6 to the third baseman (a more logical assignment, when one thinks about it), or would number the outfield positions from right to left. Indeed, the man generally credited with inventing the concept of the scorecard, Henry Chadwick, was of the opinion that fielders be numbered according to their position in the batting order. For example, "F1" was a fly ball caught by whoever batted first in the opposing batting order. In an era when there were almost no substitutions, but players changed positions from game-to-game, this would have made a certain sense. Such a system would however be massively confusing today.

Phil Rizzuto introduced the code "WW". When asked why he had WW in his scorebook, Rizzuto said he "Wasn't Watching".