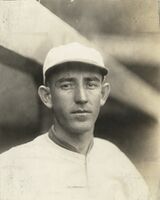 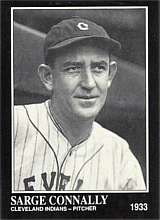 Rubber-armed Sarge Connally pitched his entire twelve-year major league career in the American League for the Chicago White Sox and the Cleveland Indians. In 304 games, he made 67 starts and recorded 31 saves. The Neyer/James Guide to Pitchers says his key pitch was the fastball.

He was with Toledo in 1930 and part of 1931. He pitched part of 1934 for the Buffalo Bisons and attracted attention by sometimes "fielding" balls hit back near the pitcher's mound by sticking out his foot to stop the ball. A book that came out around the time said that Connally had won the Congressional Medal of Honor for his service in World War I in the Marines, but it was not true. Source: Bisons historical site