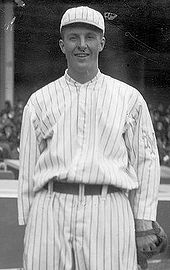 Sandy Piez was the first player to spend the majority of his career in the major leagues as a pinch-runner. He was born in New York, NY in a German immmigrant family, which moved to Erie, PA a couple of years later. He played professional ball while attending college and attracted attention thanks to his speed, particularly when he stole 72 bases in the Virginia League in 1913. His contract was purchased by the New York Giants and he went to spring training with them in 1914. Manager John McGraw decided to keep Piez on the team because of his potential value as a pinch runner for the team's notoriously slow-moving catchers. He hardly played the field that season, only getting to start a couple of games in the outfield on the season's last day. He played center field in the first game of a doubleheader against the Philadelphia Phillies, and left field in the second game, hitting two singles and a triple, giving him a slugging percentage of .625. He also scored 8 runs in 33 games as a pinch runner.

Sandy Piez was sent to the Rochester Hustlers of the International League in 1915. He played 117 games and stole 17 bases, then, after the season, was offered a position as head baseball coach at his alma mater, Rutgers University. He spent the 1916 and 1917 seasons there, then went into business after that. On December 29, 1930, he was killed when a car driven by his brother-in-law slid off an icy bridge in Atlantic City, NJ and fell into the ocean. He left behind a wife and a 15-year-old son.