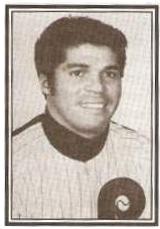 In 1943 Sam Parrilla was born in Santurce, Puerto Rico. An outfielder, he was of half Puerto Rican and half Italian descent. Before the 1963 season started, Parrilla was signed as an amateur free agent by the Cleveland Indians. He was spotted and signed by Indians scout Jose Seda.

He started his professional baseball career in 1963 with the class A Midwest League Dubuque Packers. He appeared in 118 games, had 434 at bats, with 104 base hits for a .240 batting average. He spent several years in the minors before being sent to the Philadelphia Phillies in 1969.

The Phillies assigned him to the Raleigh-Durham Phillies of the Carolina League. There he had a great season, in just 95 games he led the league in grand slams (3), was second in homers with 28 and third in RBIs with 85. He hit .383 that year, the first of three consecutive seasons in which he would hit .330 or better.

Parrilla finally got to the big show, making his debut on April 11, 1970. He appeared in only 11 games. Sam pinch hit in a 4-0 loss to the Pittsburgh Pirates, which ended a Phillies win streak. On May 3rd, he collected his first hit against San Francisco Giants pitcher Mike McCormick and on May 8th, he collected his second hit - a double - off Los Angeles Dodgers pitcher Claude Osteen. In his last game, on May 11th, a 3-0 loss to the St. Louis Cardinals, he played right field and went hitless in three at bats. This year would be his only appearance in the major leagues.

On December 16, 1970 he was traded by the Phillies along with Jim Hutto and Grant Jackson to the Baltimore Orioles in return for Roger Freed.

The Orioles sent him to the Rochester Red Wings in 1971, where he had another good season, hitting .333 in 375 at bats. Sam was in AAA ball in 1972 as well, but did not live up to expectations and this would be his last season in professional baseball.

All told, he played in the Indians, New York Yankees, Phillies and Orioles minor league systems.

Retired from baseball for some 20 years, Parrilla was driving his car in Brooklyn, NY in the winter of 1994 when he was rammed from behind by a Jeep that contained several passengers. Both he and the other driver decided not to report the accident to their insurance companies, agreeing to meet a few days later when Sam would collect the money for the damage to his car. On the afternoon of February 9th, Sam showed up to get his money at the corner of Hoyt and Pacific Streets. An argument ensued and Sam was shot once in the chest by a 15-year-old assailant at point blank range. He was taken to Long Island Hospital in Brooklyn, where he died from his wound. Parrilla was just 50 years old.

His daughter is actress Lana Parrilla.