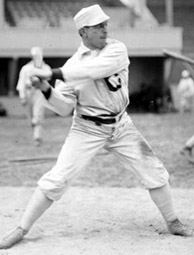 Nicknamed "Sandow" after a well-known circus strongman of his era, Sam Mertes began his big league career with the Philadelphia Phillies in 1896. After playing with the Columbus Senators of the Western League for a time, he returned to the majors with the Chicago Orphans in 1898. Prior to the 1901 season, he jumped across town to the Chicago White Sox of the new American League, and he started in the circuit's first game on April 24th. On May 9th of that year, he broke up a no-hitter by Cleveland Blues pitcher Earl Moore in the 10th inning. The next year, 1902 he played every position for the Sox, including pitcher (he was 1-0 and only allowed 1 earned run in 8 innings on the mound).

In 1903, Mertes signed conflicting contracts with the Sox and New York Giants, and an arbitration committee ultimately awarded his contract to New York. He went on to have his best season that year, hitting .280 while leading the National League with 32 doubles and 104 RBIs. In an October 4, 1904 game against the St. Louis Cardinals, he hit for the cycle. He was traded to the Cardinals in 1906 and ended his big league career after that season.

He umpired one game in the National League in 1905.