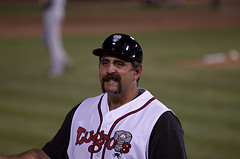 Catcher Sal Fasano was selected by the Kansas City Royals in the 37th round of 1993 amateur draft. He made his professional debut in 1993 in the short-season Northwest League with the Eugene Emeralds. He batted a respectable .267/.355/.511 with 10 home runs in 176 at-bats.

The following season, 1994, Fasano was named MVP of the Midwest League despite spending the last month of the season in the Carolina League. He batted .281/.366/.551 with 25 home runs for the Rockford Royals before he was promoted to the Wilmington Blue Rocks. He continued his success by hitting .322/408/.633 and 7 additional homers for Wilmington.

After playing for the Toronto Blue Jays, Fasano went on to manage the organization's Midwest League affiliate, the Lansing Lugnuts in 2010. In 2011, he moved to their Double-A franchise, the New Hampshire Fisher Cats. He was named as the Eastern League's Manager of the Year that year after guiding the team to a 77-65 record and the League Championship. He stayed at the helm at New Hampshire in 2012, then in 2013 was named the Blue Jays' minor league catching coordinator. In 2015, he was named the organization's minor league pitching coordinator. In 2018, he moved to the Atlanta Braves as a major league coach responsible for catchers.