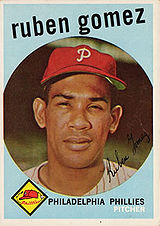 Ruben Gomez was one of the earliest Puerto Ricans in the major leagues, born the same year as fellow Puerto Rican Vic Power. Gomez pitched ten years in the majors and was among the league leaders in ERA in both of his first two seasons. In his last year, 1967, he was the oldest player in the National League.

He was once chased (literally) from the pitcher's mound into centerfield with a furious Joe Adcock of the Milwaukee Braves on his heels. Gomez hit the big slugger - who had homered in his previous at bat - with a pitch and Joe was convinced that Gomez had intentionally thrown at him. Fortunately for the fleet-footed and much smaller Gomez, he decided not to wait to exchange pleasantries with the plodding, slow-footed Mr. Adcock - who outweighed Gomez by at least 50 pounds! He was a golf pro in Quebec in the late 1960s as well.

Rubén was known in Puerto Rico as El Divino Loco (The Divine Fool).