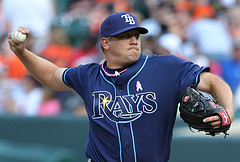 Rob made his pro debut with the GCL Twins, going 1-3 with two saves and a 4.64 ERA with just one walk in 33 innings. Moved up to the Fort Myers Miracle, the right-hander gave up three runs in five innings. In 2007, Delaney blossomed, going 1-0 with 28 saves and a 0.77 ERA for the Beloit Snappers. He held opponents to a .152 average and walked 6 while fanning 56 in 46 2/3 innings. Promoted to the Fort Myers Miracle, Delaney was 2-0 with 7 saves and a 1.54 ERA, again whiffing over a batter per inning. He tied Bobby Korecky for the most saves by a Twins farmhand and tied Korecky and Chris Perez for second in the affiliated minors, after Steven Register. Despite not finishing the season in the circuit, he was second in the Midwest League in saves, 3 behind Kenny Maiques. Delaney made the MWL All-Star team, picked alongside Barret Browning as the top two relievers. Baseball America rated him as the circuit's top relief pitcher. Not bad for a guy who no one wanted to draft just a year prior.