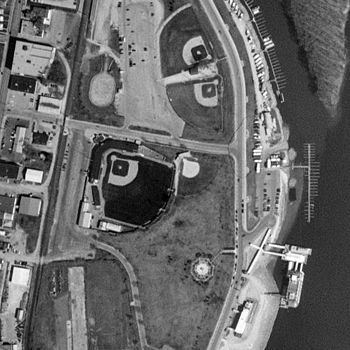 NelsonCorp Field was the home of affiliated baseball in Clinton, IA from 1937 to 2019. After that and the pandemic-cancelled 2020 season, restructuring eliminated the Clinton LumberKings of the then-Class A Midwest League.

In 1954, the Clinton Pirates joined the Midwest League's predecessor circuit, the Mississippi-Ohio Valley League, playing in what had opened as and was still known as Riverview Stadium. The circuit changed names in 1956 while adding Iowa teams, and the 'Kings were the only one that hadn’t changed cities since. They last changed nicknames in 1994. The area was the sawmill capital of the world when Clinton first hosted professional baseball in 1895, and the daughter of a 'Kings co-owner used that fact to name them.

NelsonCorp Field hosted an immaculate inning – three strikeouts on nine pitches – by 'Kings pitcher Tanner Andrews on July 11, 2019. Following the 2017 season, the Miami Marlins picked Clinton as its Low-A team after the much closer Greensboro Grasshoppers of the South Atlantic League dropped them for the Pittsburgh Pirates. In the 2021 reorganization, the Marlins gave up Clinton for the greener pasture of a new stadium elsewhere in the Midwest League – at Beloit, WI, leaving Clinton without an affiliation.