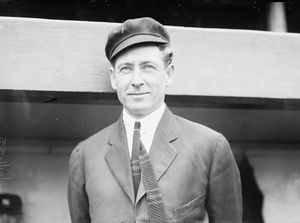 Although Jack "Rip" Egan played in only one major league game, for the Washington Senators in 1894, he was a major league umpire for years.

The source The Baseball Guru - Umpires Register shows him as an American League umpire from 1907 to 1914; he also umpired a few games in 1903. He is supposed to have been president/manager of the Scranton team in 1926, as well as managing Milwaukee, Providence, Newark, and Oklahoma City. He umped in the minors but no dates are given besides a stint in the American Association from 1905 to 1907. He coached Providence College (1935-1937) and scouted for the Boston Red Sox (1939-1944) and Pittsburgh Pirates.

A highlight was umpiring the 1913 World Series.