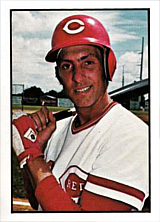 Shortstop Rick Auerbach played eleven seasons in the major leagues for four different teams. While his lifetime batting average is only .220, it is a bit misleading; he hit over .300 several times, especially once he began pinch-hitting.

Auerbach went to Taft High School, as did Robin Yount. When Yount broke in with the Brewers in 1974, Auerbach had moved on to the Dodgers. Rick and Doug DeCinces played infield together while at Pierce College.