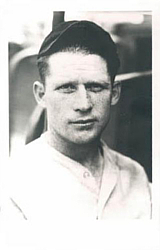 Barnes made his Major League debut with the Washington Senators on September 29, 1927. He was with the Capital City club until being traded to the Chicago White Sox on June 13, 1930 for Dave Harris. The outfielder finished his big league career on September 20, 1930 after appearing in 286 games, with 836 at-bats and 225 hits for a .269 career batting average. He also spent fourteen years in the minor leagues, hitting over .300 twelve times. His best numbers came in 1938 with the Danville Leafs of the Bi-State League when he hit .387 with 15 home runs. Barnes also spent six of these seasons as a player-manager, ending his minor league career as manager of the Middletown Red Sox of the Ohio State League in 1944.

After baseball, Barnes operated a small store and post office in Suggsville, AL. He died from lymphoma on July 3, 1959 at an infirmary in Mobile, AL, he was 55 years of age.