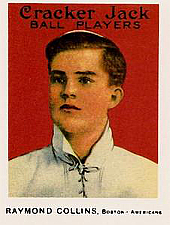 "Ray Collins is a star. He is the idol of all the lady fans, those bewitching young women, who coyly gaze from under piles of feathers and ribbons. Is it any wonder that he pitches wonderful ball when those brown and blue and gray and violet orbs are on him? Gee, it’s great to be a big, fine pitcher. If I ever have a son that’s him, a pitcher and of course he will be a dashing fine chap. Fond expectations." - Boston Evening Record, 1910

Ray Collins was a left-handed pitcher on some very good Boston Red Sox teams whose career ended abruptly at 28.

He was born on a dairy farm in the village of Colchester, VT, located a few miles from Burlington, VT, but grew up in Burlington and attended the University of Vermont. He was a teammate of Larry Gardner in college and the two of them brought their schoolboy success to the diamond, leading the Catamounts to the New England championship in 1908, Collins' junior year. Gardner signed a professional contract with the Red Sox after that season, but Collins stayed for another year, going out in a blaze of glory by striking out 19 Penn State batters in his last start in 1909. He was heavily scouted by professional teams, but chose to follow his friend Gardner to Boston.

Ray pitched a shutout against the Detroit Tigers in only his second major league start on July 25, 1909, finishing his first season with a 4-3 record and 2.81 ERA, being used only sporadically. He claimed a regular turn in the Boston starting rotation in 1910 and had an excellent year, finishing second on the team with 13 wins (13-11) and sixth in the American League with a 1.62 ERA, spinning 4 shutouts in 35 games. He started 1911 slowly, sporting a record of 3-6 at one point, and ended the year with a disappointing 11-12 record despite a 2.40 ERA.

1912 was one of the greatest years in Red Sox history, and Ray was a big part of it. The team won its second world championship with a victory over the New York Giants in the World Series. Collins went 13-8 with 4 shutouts and a 2.53 ERA in 27 games. He pitched twice in the World Series: a 7 1/3 inning no-decision in Game 2, which ended in a tie because of darkness, and a brilliant seven-inning scoreless performance in relief of Buck O'Brien in a losing cause in Game 6. Collins staked a claim among the American League's elite pitchers in 1913 and 1914. In the former year, he finished 19-8 with a 2.63 ERA in 30 starts. In the latter, he became the ace of the BoSox staff, reaching the hallowed 20-win mark in finishing 20-13 with a 2.51 ERA, 6 shutouts and a career high 272 1/3 innings in 39 games. In 1913, he had the misfortune of being matched up four times against Walter Johnson, the best pitcher in the game having his best season, and losing all four times. Three of the losses were by a score of 1-0, and the Sox were also shut out in the other one. In one of the game, on July 3rd, he only gave up a run in the 15th inning, while Boston managed 15 hits against Johnson, but still couldn't score.

In 1915, Collins suddenly lost his touch. He was only 4-7 in 25 games (only 9 starts), with an uncharacteristically high 4.30 ERA (the league ERA was 2.78). While newspaper accounts of the time do not indicate that he was injured, it is the most likely explanation for such a rapid loss of effectiveness. The Red Sox returned to the World Series, but Collins was left to watch from the bench as his teammates defeated the Philadelphia Phillies in 5 games, with Rube Foster, Ernie Shore and Dutch Leonard doing all of the pitching. Asked to take a pay cut, Collins retired prior to the 1916 season.

On the mound, Collins can best be described as a prototypical "crafty left-hander". He did not throw with much speed, but had a highly deceptive motion that was described by one reporter as like "an explosion in a leg and arm factory". It is likely that such a pitching style was physically very demanding, and that he could not have survived losing any velocity on his pitches. For his career, he was 84-62 with an excellent 2.51 ERA. He struck out 100 batters only once, in his first full season, but compensated for this with very good control, as his strikeout to walk ratio lifetime was 511 to 269.

With his career over, Ray returned to Vermont and took over running the family farm. From 1923-1926, he served as head coach at his alma mater. He was also elected to the state legislature, was Colchester's zoning administrator and served on his alma mater's board of trustees. He died in Burlington on January 9, 1970 at 82. Posthumously, he was among the inaugural inductees into the Vermont Sports Hall of Fame in 2012.