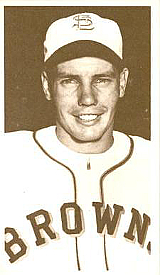 "Chuck DeWitt, the son of Browns owner Bill DeWitt, was maybe six years old when he said to me: 'Daddy always said when they needed money, they sold you. When they didn't, they got you back.'" - Ray Coleman, on his revolving door run with the St. Louis Browns, involved in five transactions coming and going to the club

Outfielder Ray Coleman was signed by the St. Louis Browns as an amateur free agent before the 1940 season. He spent his first season in pro ball with the Paragould Browns of the Northeast Arkansas League and the Springfield Browns of the Three-I League. Ray appeared in 71 games and hit a combined .238 with six homers. He was with the Mayfield Browns in 1941, hitting .346 with six dingers and was the league leader with 122 RBI. Ray spent 1942 with the Springfield club again, hitting .293 with eight homers. Coleman spent the next three seasons (1943-1945) in military service, serving with the United States Navy in the Pacific theater of war.

On his return in 1946, Ray was with the San Antonio Missions of the Texas League, hitting .287 in 139 games. He was invited to spring training with the Browns in 1947, making the team and hitting .259 in 110 games. He was hitting .172 in June 1948 when the Brownies traded him to the Philadelphia Athletics for George Binks and $20,000. Coleman was in the major leagues through 1952, ending his five-year career hitting .258 with 20 homers. He had his best season in a split season, 1951, when he hit .280/.330/.418 with 8 home runs and 76 RBI. After being waived by the Browns that July, he was scooped up by the Chicago White Sox, piloted by Paul Richards that year. The Chicago skipper had promised Ray that he would put him on his ball club if he ever got to the big leagues as a manager. Coleman went back to the Browns for a final time late in the 1952 season.

Ray dropped back to the high minor leagues for the remainder of his career (1953-1956) and finished his minor league career hitting .284 with 65 home runs in nine seasons. After baseball, Ray was employed with the American Snuff Company, was a construction foreman and a Kentucky tobacco and soybean farmer before going to Hornbrook, California, where he worked as a medic. He died in 2010 at 88.